Learning to drive is one of those milestones in any young adult’s life. It’s a gateway to independence and freedom, which most of us take for granted. It’s a dream for most 15-17 year olds to aspire to, and having a diagnosis of Autistic Spectrum Disorder (ASD) should not dampen that aspiration.

Can a high functioning Asperger’s or Autistic individual learn to drive? The answer to that question from the experts is most definitely, yes.

A recent survey of parents with children aged 15-17 diagnosed with Autism Spectrum Disorder (ASD) published by the Journal of Development and Behavioural Pediatrics shows that 63% of the young people were driving or planned to drive as soon as they were old enough. A significant number of those teens who had passed their driving test were taught by their parents. And what more is that their accident rates in the first year after gaining their licences were significantly lower than their peers.

Patty Huang, lead development paediatrician at The Children’s Hospital of Philadelphia, and lead author of the study said: “Over the past decade, the rate of children diagnosed with ASDs has increased, meaning that more of those kids are now approaching driving age. Car crashes are the number one cause of death for teenagers, so it is important that we understand how ASDs impact driving and how to develop appropriate educational and evaluation tools.”

An earlier study led by Daniel J. Cox of the University of Virginia found levels of concerns among parents high. They stated they were worried about their teenager’s concentration, understanding of non-verbal communication and tolerance.

Driving is a Social act.

According to Dr Jaime Dow, the medical adviser for safety issues for Quebec’s auto-insurance agency.

It involves obeying rules and cooperating with other drivers.

According to The National Autistic Society of Great Britain, the diagnosis of ASD should not be a barrier, some individuals will find the skill difficult to grasp due to introduction of new language, and direction, but a significant percentage will make highly competent drivers.

All medical conditions are expected to be declared when a provision driving licence is applied for. Not doing so can lead to a fine, or having the licence rejected. There are certain areas of medical history that they will need to know about, for example individuals with a history of epileptic fits, blackouts, hearing problems and vision disorders, may be asked to go for a medical, or a road suitability test.

Keeping an open mind is important. If you don’t go in thinking about their limits but think about their opportunity, they will never cease to surprise you.

Instructors of individuals with ASDs can slow down the pace of teaching providing time for role play situations which might fluster an ASD individual. Getting a ticket, or being pulled over by the police for example. 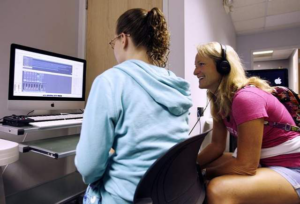 Mara Geiger of Birmingham listens to an original composition by her daughter Tabby Geiger, 14, during a program called Music and Media, teaching higher functioning autistic children learn how to use various Apple software programs at the Wish Upon A Teen office in Bloomfield Hills, Mich. Saturday, Sept. 7, 2013. Gary Malerba/Special to the Detroit News (Gary Malerba / Special to the Detroit News)

Dave Meador’s daughter just began her senior year at Troy Athens High School, and Meador, like most parents, has started to worry about what will happen when she graduates.

Complicating the transition process is the fact that his 17-year-old daughter Maribel is on the autism spectrum, which means she will probably need assistance getting to the point where she can attend college or other postsecondary schooling, find a job or secure housing for herself.

“There’s not a lot of programs out there to get young adults trained, get the skills they need and get placed in a job,” said Meador, a father of four who is chairman of the board for the Autism Alliance of Michigan.

Autism Spectrum Disorder is a range of developmental disorders of the brain leading to social, communication and behavioral challenges. As the number of cases surges in Michigan, the demand for services to help teenagers and young adults is climbing as well.

The number of people in Michigan with autism from birth to age 26 receiving special education services soared from 1,203 in 1990 to 15,976 in 2011, according to state data. Nationally, the number of affected children is up 78 percent since 2002, affecting 1 in 88 kids, according to the Centers for Disease Control and Prevention.

A report this year by the state Department of Community Health called for the creation of a state resource center for adults. Nearly half of parents of austistic individuals ages 13 to 25 said they needed better access to higher education and employment services to supplement programs offered to public schoolchildren, according to the report.

“As you go along the lifespan, there’s tons and tons of programs for kids and then as you get older, there are less and less,” said Kathy Johnson, president of the board of the Autism Society of Michigan. “They still need the same kind of support, but there’s a gap for teens and another gap for adults.”

Preparing for the workplace

There has been a shift lately toward greater emphasis on working with people on the spectrum to try to prepare them for the workplace. Michelle Soto, president of the Bloomfield Hills-based nonprofit Wish Upon a Teen, says her organization offers opportunities for teens and young adults to learn social and technical skills that would lead to jobs.

Last month, the nonprofit moved into a larger facility, setting it up to expand services such as the music and media training program. Held every other Saturday, it teaches 14 to 19-year-olds Apple software so they can eventually get certified in the programs.

“That way, they can go and try to get a job or internship using that software,” Soto said. “It’s geared toward building self-esteem and social skills, which are so vital for them to survive in the real world.”

On the education side, Michigan has few programs for young adults. For the past eight years, Oakland University has had a program called OUCARES to assist students with autism, while Eastern Michigan University’s Autism Collaborative Center developed its program five years ago.

Even as programs and services grow, many can’t get the assistance they need, said Kathy Sweeney, director of OUCARES.

“The gap is probably getting wider in that more and more individuals are getting diagnosed with autism,” she said. “This is a community issue, and we need to make it a more autism-friendly community.”

But training and teaching skills is only one part of the equation, says Cindy Burdi, an employment development coordinator with the Macomb Oakland Regional Center. A bigger challenge is overcoming the hesitation some employers may have about hiring a person with disabilities.

Burdi’s center provides job coaches for employers to help those with autism perform work. She even goes to job interviews to help clarify employers’ questions for her clients.

“One of the biggest things is employers are afraid of the adjustments they might have to make and they don’t realize they’re very minor things. They’re nervous to employ someone,” Burdi said.

Rhonda McGrath of Farmington, whose son Nick Welday, 19, is on the autism spectrum, says she is concerned about his job prospects. He goes to school and works part-time cleaning an office, but she says “the employment picture is pretty dismal.”

“The most important thing is educating employers on how these individuals are employable and how they do have skills,” she said.

Dr. Pamela Lemerand, clinical director of the Autism Collaborative Center at Eastern Michigan Univeristy, says employable teens and young adults are getting more help than in the past.

“At some point, there are going to be so many adults on the spectrum and they are going to cost so much to society if they are all dependent on Medicaid, and that’s not sustainable,” she said. “So there will be calls by government officials, by politicians, human services agencies to create better programs to allow them to engage in citizenship.”

Lifetime costs for a person on the autism spectrum are estimated at $3.2 million, according to the Michigan Autism Spectrum Disorders State Plan.

Meador, the chief financial officer at DTE Energy, says he and other employees are working to launch a program to provide jobs for people on the autism spectrum. In the meantime, Meador, who also has three older boys, says he’s focusing on seeing his daughter get to where she wants to be.

“My hope for her is the same as my other children,” he said. “That they reach their full potential, whatever that is for them.”

■ In 2011, 15,976 students diagnosed with ASD were enrolled in Michigan schools.
■ About 50,000 individuals living in Michigan have ASD.
■ One in 88 children in the United States is diagnosed as being on the autism spectrum.
■ Boys are almost five (one in 54) times likely to be diagnosed with ADS than girls (one in 252).
Source: Michigan Department of Education, Centers for Disease Control